Quick Tip: How to Rename an Existing Smart Object in Photoshop CC

For OCD designers who like to keep their documents organised

Anybody who works with Photoshop regularly will have encountered Smart Objects, they are a great way to create dynamic elements which automatically apply changes to all instances of the same object, and allow you to apply transformations and filters non-destructively to bitmap images. However once created, Photoshop does not offer any straightforward way to change the Smart Object filename. This has always bugged me, and judging from a quick internet search I'm not alone.

Although a filename doesn't affect the functionality of a Smart Object, it can get very frustrating when working with documents that have multiple Smart Objects and you want to give them relevant, contextual names such as 'red box.psb' (what happens if that box isn't red anymore?). Or if you create Photoshop documents with Smart Objects to share with others as I do, you want filenames to be clear and understandable. Also, pasted Smart Objects from Illustrator are always given the default name 'Vector Smart Object' which is very generic and doesn't say anything about the contents of the Smart Object. Most annoying though is the way Photoshop adds numbers to filenames. When you edit a Smart Object a temporary file is created with the extension .psb, for example 'mysmartobject.psb'. Photoshop then deletes this temporary file when the master document is closed. But, if you edit a Smart Object with the same name as a temporary file that already exists you end up with a number appended to the file name, for example 'mysmartobject1.psb'. And once you hit save, that new filename is permanently changed! Whats worse is that if you do this again and again, you actually sometimes end up with 'mysmartobject11.psb' and 'mysmartobject111.psb' etc. Call it OCD if you want, but this bugs the hell out of me!

Luckily, since Photoshop CC 14.2 there is now a way you can change the name of an existing Embedded Smart Object without recreating it from scratch, and it's actually surprisingly simple..

First, open your file with an existing Smart Object, or create a new one and select the Smart Object layer. Show the Properties panel by going to Window > Properties and click 'Convert to Linked...' 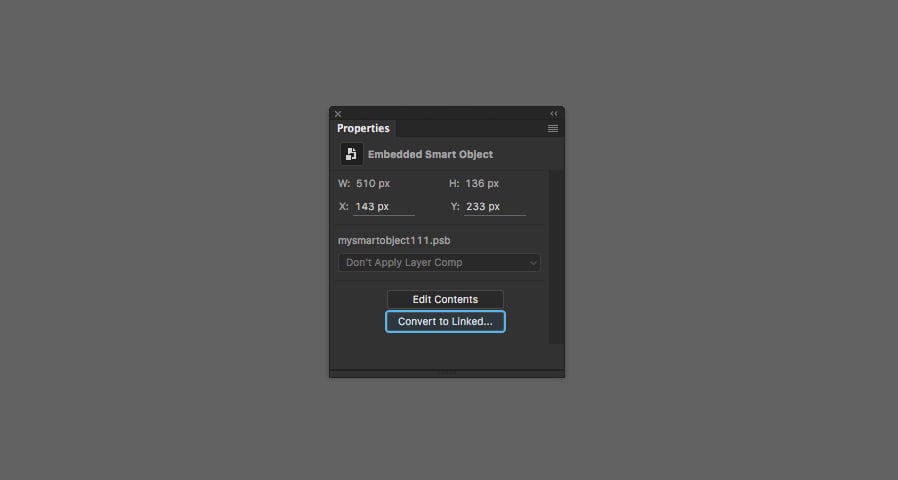 In the dialog that pops up, enter the new filename of your Smart Object and save it somewhere easy to find (eg. Desktop). Click 'Embed'. Your Smart Object now has a new name! Delete the .psb file that you saved in Step 3. This only works with Photoshop CC version 14.2 and newer which support Linked Smart Objects. If you have multiple instances of the same Smart Object, you will need to recreate the other instances manually using the new Smart Object.

How to Create Rain Droplets for Petals in Photoshop

This tutorial will show you how a quick and easy technique to create rain droplets in Photoshop, which can then be added to petals or even other objects such as cold aluminium drink cans and glass surfaces.Read more

How to Make a Laptop Mockup

Making a mockup from any kind of device is so easy if you have the right tools. In photoshop, there are tons of ways to make your own mockup, some take more time, while others can be done in less than 10 minutes. Today, you will learn how easily you can make your own laptop mockup from an exiting photo and put any screen content you wish.​Read more

Clients often respond best to design when you display them in context. That's why Mockups are a designer's life safer! Wether it's in posters, magazines, a simple letterhead, or a book cover like the one you will learn to make today, the technique you will learn here is valid to be used over any type of mockup you want to make.​ Read more

Popular Photoshop Color Effects and How to Use Them

You can really do anything to an image in Photoshop, but color effects are by far the most popular tools. Whenever you're editing an image, you will almost undoubtedly make some color adjustments, even if they're just slight ones. Read more