Natalie is one of the co-founders of Medialoot. She's mainly responsible for making sure the website is running smoothly, and she's probably the one who has helped you out via email too.

The New iPhone X and What It Means for Designers

It’s the tenth anniversary of the iPhone, and Apple released its new series of phones today. Not only do we have a new generation iPhone 8 and iPhone 8 plus, but we have the iPhone X, which Tim Cook calls the "biggest leap forward since the original iPhone."

Just in time for the release today, we have a new iPhone X PSD Mockup for you. This mockup has been created using only vector shapes and layer styles in Photoshop. Artwork can be added to the mockup via the included Smart Object. 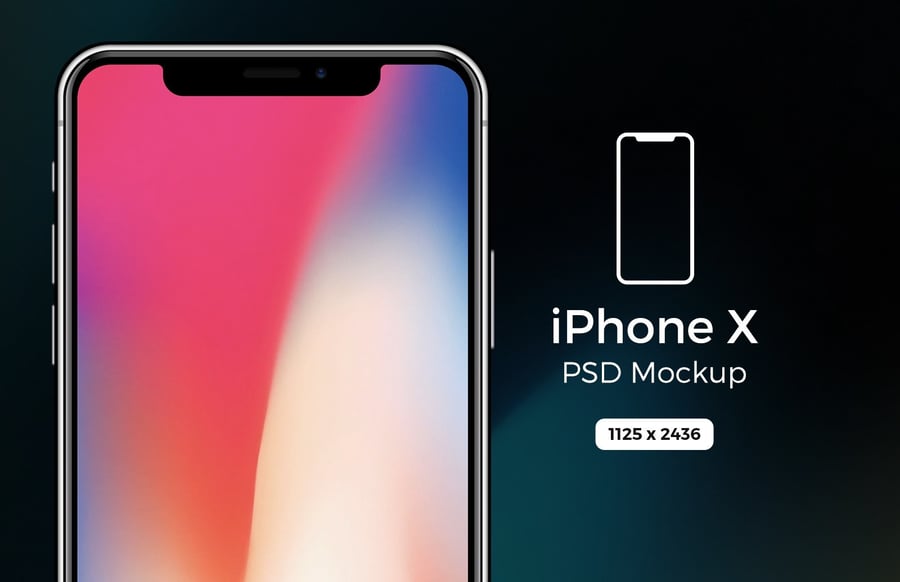 Almost everything. For the iPhone 8 and iPhone 8 Plus, there's a new A11 Bionic Chip, which is the most powerful chip in a smartphone yet, built on a 64-bit design. This means the phone is faster, and the photography capabilities are bumped up significantly. The new phones also now support wireless charging using the Qi Open Wireless standard (the same one that IKEA uses in their wireless charging furniture).

The iPhone X is even more advanced. No longer does this phone have the home button, instead you use a swipe up gesture from the bottom of the phone. The screen is almost edge to edge, with a 5.8" diameter. How do you unlock the phone? Apple released a new security feature called Face ID that runs off of the A11 Bionic Chip with a neural engine built in to process facial recognition.

If you're looking for further details, check out Engadget's iPhone X summary, or go watch the keynote on Apple.com for the full details.

What Does this Mean for Designers?

There are a few new features that are going to affect designers. First, the new camera is a lot more powerful, and it's going to make taking photos that look good even easier. The new screen size and resolution will also impact how we approach our designs.

The new screen of the iPhone X means designers will need to consider the cropped areas and rounded corner in their designs. Designers will have to either decide to stretch imagery and backgrounds to what is essentially a full-bleed with some cutoff or keep the square content and add padding around the top and bottom of the screen to accommodate the cutouts.

Additionally, because of the new aspect ratio, designers will have a lot more vertical real estate to fill on the iPhone X compared to the iPhone 7 and iPhone 8.

If you have any tips or see any interesting designs, please share them with us in the comments below.

The iPhone 8 and 8 Plus are available in both a 64GB and 248GB version in Silver, Space Grey, and Gold. You can pre-order them on the 15th and they're shipping and available in stores on September 22, starting at $699 and $799 respectively.

The iPhone X is also available in both a 64GB and 248 GB version but in Space Grey and Silver. You can pre-order it on October 27th for delivery starting November 3rd, starting at $999. Just in time for the release today, we have a new iPhone X PSD Mockup for you. This mockup has been created using only vector shapes and layer styles in Photoshop. Artwork can be added to the mockup via the included Smart Object.

Stunning free and premium mandalas for all your summer projects.Read more

Presenting business card mock-ups to clients but want it to really pop instead of the regular flat layout? Then read on...Read more

Mockups are a great way to show the world your designs in a realistic way even if they aren't printed/made yet. With a mockup, your design will stand out from the rest while giving your client or audience a taste of how it will look once it's actually produced. Today, you will learn how to make a white t-shirt mockup that you can use an unlimited number of times to show your designs in a more realistic way.Read more

How to Create a Gorgeous, On-Trend Poster Mockup

A good presentation, whether it's for a client or for a personal project, is super important — the first impression is the one that counts. Most of the time, as a designer, you only have to show the designs and layouts but not the final product; that's why it's a good idea to have a mockup to show off all your hard work. Plus it helps clients understand your vision better (and decreases surprises come printing time). There are so many free & premium mockups available on the web, but making your own is easier than you think! Today I'll show you how to make a poster mockup with a simple process that you can later use to make business cards, flyers, brochures or any other printing material you might need. Read more