How To Get More Out Of Layer Styles

Using layer styles to style objects is something that takes some time to truly master, understanding layer styles in Photoshop, Fireworks and Illustrator can mean that your designs will never fall short in visual appeal whatever environment you're using.

Lots of design blogs and tutorials will tell you that Bevel and Emboss and Drop Shadows are the work of the devil, in particular Bevel and Emboss which to be fair is understandable but what they actually should be saying is that the preset options shouldn't be used not the effects themselves. Just the same as you wouldn't use the default black > White gradient or a 3px solid red stroke on every elements in your designs, you shouldn't just tick Bevel and Emboss and leave it at that. 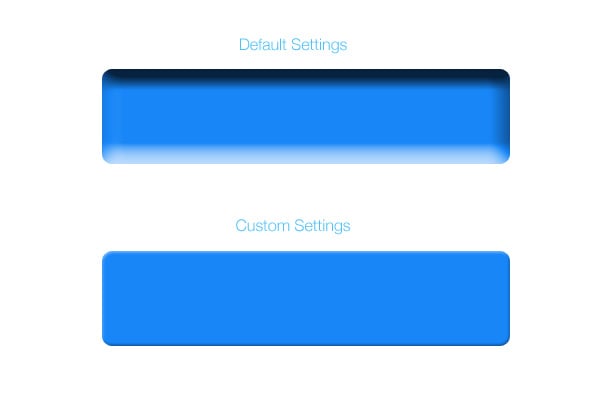 This example demonstrates what evil the preset Bevel and Emboss options can do to an un-expecting blue rectangle, I hope most if not all of you would agree that looks bad, however with just a few tweaks the second rectangle looks like a nice subtle raised button. 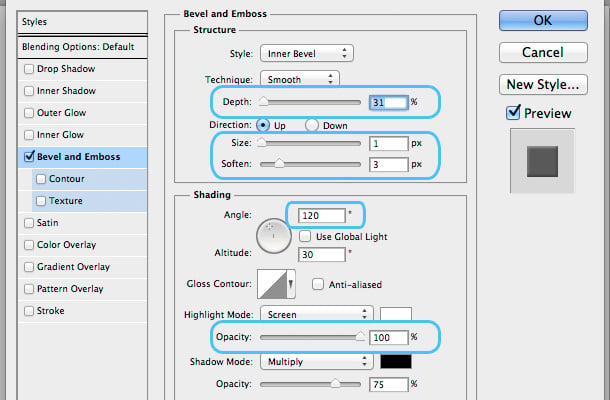 I decided to reduce the depth of the effect to instantly lower the harsh amateurish feel, and next I played with the size and soften options until I had a small, more realistic looking shadow and highlight. The size option defines the size of the shadow and the soften option blurs the result of the shadow. I switched the angle of the shadow to get emulate light coming from the top of the page rather than the bottom, It's easier to play with crosshair on the visual selector and place where you think the light source would be in relation to the object (the center of the circle). Or of course check the option to use the global light to set a master light source for multiple effects similar to this such as drop shadow and inner glow. Highlight and shadow modes let you set the opacity, blend type, and the color of the shadows and highlights to make them appear more natural. Remember though, the options you use will always varying depending on the object and the effect you want to achieve, this settings worked well in this instance but may not look so good on other objects, to help you experiment with the settings

As basic as this sounds it's actually something that stumps a lot of Photoshop users, especially beginners. Because Photoshop is a bitmap application, strokes aren't part of it's native feature set, they are instead emulated (granted, very well) using layer styles. So if you draw a rectangle you can quite easily add a stroke to that object using layer styles. But if you need an object (with a solid fill) in order to apply a stroke, and reducing the opacity of the layer will affect both the fill and stroke, then you can see why some people find it confusing. The solution is simple once you know how, In the advanced blending options and below the layer opacity field, there is a field called 'Fill', and as the name would suggest this directly targets the fill opacity of any object whilst ignoring layer styles, such as the stroke ;).

In summary, to create an outlined shape:

It's interesting to understand exactly what shadows and glows do, the names are slightly misleading in their function as they do not do what the dictionary definition of the terms are. According to the dictionary a shadow is a "dark area or shape produced by a body coming between rays of light and a surface" and glow is to have "a steady radiance of light or heat". Although, shadow and glow can certainly be used to achieve these effects and it is of course what they are primarily used for they are not limited to these effects. 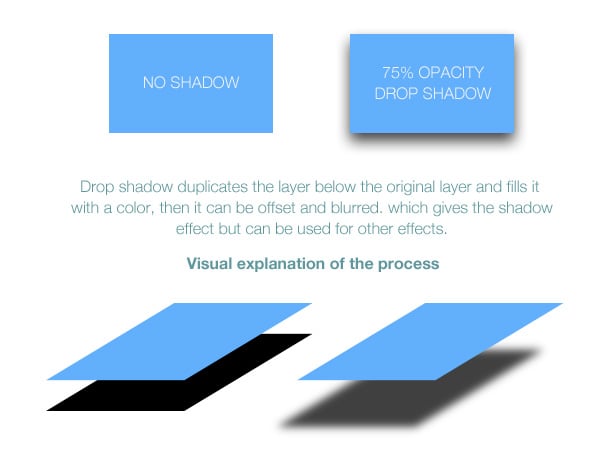 Neither shadows nor glows in graphics applications have anything to do with light or the color of the effect, they are so customizable that they can be interchanged and used for many different purposes, one of my personal favorites is using a 1px white drop shadow, with a 1px Y offset to create a subtle highlight beneath objects. These examples were created using only Photoshop's shadow and glow layer styles.

Not technically layer styles, well not in Photoshop at least but smart filters allow non-destructive adjustments, such as changing the brightness and contrast of a landscape photo without actually modifying any pixels, the brightness and contrast adjustment values can be tweaked at any point. Fireworks also has smart filters like those seen in Photoshop but they are applied in the same way as layer styles such as drop shadows and glows are.

It's recommended to always use smart filters when possible, this will avoid recreating images or unnecessary undoing as no changes are fully committed to the layer unless the layer is flattened.

This is where Fireworks and Illustrator really come into their own and actually have an advantage over Photoshop in terms of layer style complexity, in Photoshop you can only apply each layer style once and it has to be applied in the order Adobe set out for you. This can become a big problem when you want to apply a texture above a gradient for example. If you are using Fireworks or Illustrator (pictured above) however, then you're in luck because you add each filter individually from a menu, and you can even apply multiple instances of the filter, as well as dragging them around like layers to rearrange the order they are rendered.

The only downfall that Fireworks and Illustrator suffer from is less comprehensive options, such as the ability to set a blending option (such as multiply, screen, overlay etc.) on layer effects in Fireworks.

Adding subtle noise to objects gives a textured effect and makes the elements feel more tactile and realistic, in Photoshop this effect can be achieved with layer styles by creating a noise pattern and then applying it as a pattern overlay.

In Fireworks surprisingly, it's much simpler:

These are just a few tips and tricks to help you get the most out of layer styles, there are many more options to be explored and the best way to understand them is experiment and don't be afraid to go beyond the default settings, they can always be reset with a single click so you won't break anything. Also, remember that layer styles should be used in moderation. We all know what happens when designers get carried away with special effects (think the 90's and more recently web 2.0) so be responsible!